Do you know what the English Flag looks like? No – nice try, but that’s the Union Flag : the flag of the United Kingdom. We’re looking for the flag of England alone!

That’s right – it’s this second flag, with the white background and the red cross, that’s the flag of England, as opposed to the United Kingdom. But if you look carefully at the Union Flag, you can actually see the English flag hiding in the middle of it!

The Life of George

You might be interested to know that the patron saint of England not only wasn’t from here, but he most likely never came to England!

The historical St. George was reportedly a soldier in the Roman army and a crusader (a person who fights in military conflict in the name of Christianity) who originally came from Cappadocia in Ancient Greece. This part of the world is now part of modern Turkey.

However, you might want to be a little suspicious of some of the things you hear about him : after all, the most well-known story about St. George has him fighting and killing a man-eating dragon, as shown in this famous painting by the Italian painter Raphael. 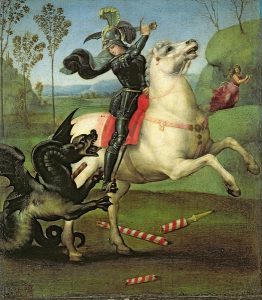 You see, the dragon was being a bit of a nuisance : stealing sheep from the townsfolk of  Silene, Libya, and eventually asking for humans to eat when the sheep weren’t enough. Someone clearly had to deal with it!

Enter George – he came to town, killed the dragon, rescued the young girl who was going to be sacrificed, and converted everyone to Christianity. At least, according to the legend!

It’s more likely that the historical Saint George was a martyr : someone who dies for their faith or beliefs. According to the Greek version of the story, he was decapitated (had his head cut off) outside Nicomedia, the capital city of the Eastern Roman Empire, for refusing to give up his Christian faith.

This status as a Christian martyr means that George is a very popular saint across the world. Not only England, but Ethiopia, Bulgaria, Georgia, Catalonia, and Aragon in Spain also claim him as a patron saint!

St. George’s day – which traditionally takes place on the 23rd of April – is no longer held as a public holiday in the UK. Businesses and buses still run as usual.

However, the holiday is sometimes still celebrated in England with parades and dancing, and English people sometimes wear red roses on their lapels (their shirt collars) to mark the special day.

The flag of St. George also remains popular with English football fans, who have been flying the flag since the 1996 European championships!

So how much have you learned about England’s patron saint? Do the activity below to find out!

For more information about British and English culture check out some of our other blogs, like What does it mean to be English? or all about Traditional British Food.