British food is often overshadowed by that of countries more famous for their cooking.  Just across a small stretch of sea is France, famous for such dishes as moules-frites and escargots, and further south, Italy, with all the pizza, pasta and ice cream you could possibly eat. But, although British meals aren’t as famous as those of other countries, they’re still absolutely worth a taste. Here are six delicious British meals you can try in the UK!

This famous dish, cheap, easily accessible and delicious to boot, is probably the most well-known British meal. Some believe it was introduced to Britain in the 1860s, by Jewish immigrants from the Netherlands. Regardless, it quickly caught on – by  1910, there were over 25,000 fish and chip shops, which had increased to 35,000 by the 1930s. It became so popular that it was one of the few foods not be rationed during the Second World War!

Firstly, you fry a fish, usually a cod or haddock, in a thick liquid known as batter, giving it a tasty, greasy flavour. Then you fry chopped potatoes in oil to make chips, which you can serve with ketchup, mayonnaise or vinegar. However, some would say true Brits only eat fish and chips with tartare sauce!

This meal, as its name might suggest, is traditionally served on the Christian holy day of Sunday, after people have just gotten out of their usual church service. It’s normally eaten in a family or community setting, with the intention of bringing people together. There are four key ingredients to any good Sunday roast : some kind of meat (usually beef), vegetables, potatoes, and Yorkshire Pudding.

Unlike fish and chips, however, in which the meat and potatoes are fried in oil and batter, the food is roasted – a method of cooking which involves cooking using only air, and no liquids.

Yorkshire Pudding, the final ingredient, is normally served as part of a main course despite its name. It’s a delicious savoury pastry created using a special batter made from eggs and flour, and goes amazingly with gravy  – a tasty brown sauce without which no Sunday Roast is complete.

People in the North of England also use gravy with fish and chips, instead of tartare sauce!

Bangers And Mash/Toad In The Hole

A ‘bang’ is a loud noise or an explosion, but don’t worry: nothing will explode while you’re eating these next meals! Rather, the bangers here are sausages, either beef or pork, which have been cooked to perfection and served with potatoes.

However, if you use Yorkshire Pudding batter instead of potatoes, and bury the sausages in it before cooking them, then you have Toad-In-The-Hole. This dish’s curious name comes from the sausages in the batter reminding some people of a toad hiding underground! 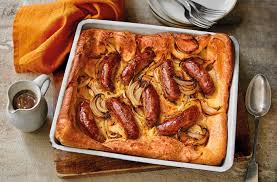 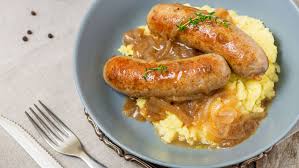 Of all the dishes you’ll read about in this blog, this one might be the least familiar, and might seem the strangest. But it’s a meal of great importance in Scotland, where it’s the national dish.

Haggis is a savoury pudding which contains what the Scots call a sheep’s ‘pluck’ – a mixture of the animal’s heart, liver and lungs, which have been ground up into a powder. Traditionally, this mixture is served contained in the sheep’s stomach, though it is more often served in an artificial case nowadays. This is an ancient tradition: the name ‘haggis’ was first recorded in England in 1430 AD!

The ‘neeps’ in the dish’s name refer to turnips, a common vegetable in Scotland, and the ‘tatties’ to potatoes. Both of these are typically mashed, just like in bangers and mash.

This meal is so culturally valuable to the Scots that the famous Scottish poet, Robert Burns, wrote a poem about it, named ‘Address to a Haggis’, in 1787. This poem is traditionally recited at Burns Night, a yearly celebration of Scottish culture where haggis, neeps and tatties is the main course : served, of course, with a ‘dram’, a glass of top-quality Scotch whisky. 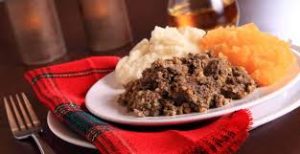 Don’t worry, rabbit lovers : despite its name, this Welsh dish doesn’t actually contain any rabbit meat. In fact, it doesn’t normally contain any meat at all. Rather, you make Welsh Rarebit by pouring a delicious sauce, made primarily from melted cheese, over toasted bread. The mixture can also sometimes contain such diverse ingredients as ale, mustard and Worcestershire sauce.

The dish has many different variations : add a fried egg on top of it, and you have a ‘buck rarebit’, named after a male rabbit, or blend it with a tomato and you have a ‘blushing bunny’, named for the new bright red colour given by the tomato.

The name comes from a legend claiming that Welsh peasants, forbidden to eat rabbits caught on the property of the nobility, ate melted cheese instead. Hence, ‘Welsh Rabbit, or Rarebit’.